The Gherdeina Local Heritage Museum is situated right in the center of Ortisei and exhibits valuable collections related to the cultural and natural history of the Gardena Valley: precious sculptures and paintings of local artists of the last four centuries and a unique collection of ancient wooden toys of the area, spectacular minerals and fossils of plants and marine creatures testitying to the fascinating evolution and creation of the Dolomites as extensive coral reefs over 200 million years ago, as well as remarkable archaeological finds of the oldest human traces of the area.

Two very extraordinary exhibits are the richly illuminated Lenten cloth of the Saint James’ Church above Ortisei (1620) and the very impressive original cruzifix of Seurasas (1932).

The multimedial exhibition Bierjun 1490. A Secret Passion shows the tiny bedchamber room from the Bierjun farmhouse near Ortisei with very rare drawings from the Late Middle Ages. The delicate drawings on the wooden walls are shown through a digital window.

The Museum Gherdëina also houses the Archive and permanent exhibition of Luis Trenker (1892-1990), actor and director of many mountain films.


The great ichthyosaurus of Mount Secëda

Starting 16 July 2021 at the Museum Gherdëina

Face to face with a creature that is half fish, half saurian, ten metres long and armed with sharp teeth: although the Ichthyosaurus Cymbospondylus lived 241 million years ago, such an encounter is still possible - thanks to virtual reality and a new attraction at the Museum Gherdëina.

The VR experience is based on the fossilised bone remains of an ichthyosaur found on Mount Secëda in 1968, unic in the world for the period of the Ladinicum. They served experts as the starting point for a scientific reconstruction, including not only the ichthyosaur itself, but also its habitat in the Tethys Ocean,
which it dominated for almost 100 million years.

Here you can download the exhibition overview for ICHTHYOSAUR OF MOUNT SECEDA as PDF.

The ichthyosaurus Cymbospondylus, half fish, half lizard, was an impressive animal. Thanks to virtual reality from 2021 onwards it can be experienced first-hand in the Gherdëina Museum in Ortisei. A video of the project made by the young paleontologist Nicola Castelnuovo shows how enormous this marine animal was that dominated the Tethys Ocean 240 million years ago. The discoverers of the fossil remains of the ichthyosaurus of the Secëda J. Comploj y M. Strobl in the Museum Gherdëina, 2014

Them museum reopens!
We are delighted to be able to reopen our doors and present our collections to the public. Our spaces, and the security measures we have taken, guarantee a visit in full compliance with all COVID regulations. 
MEJES: The Masi of Val Gardena. Memory of a landscape 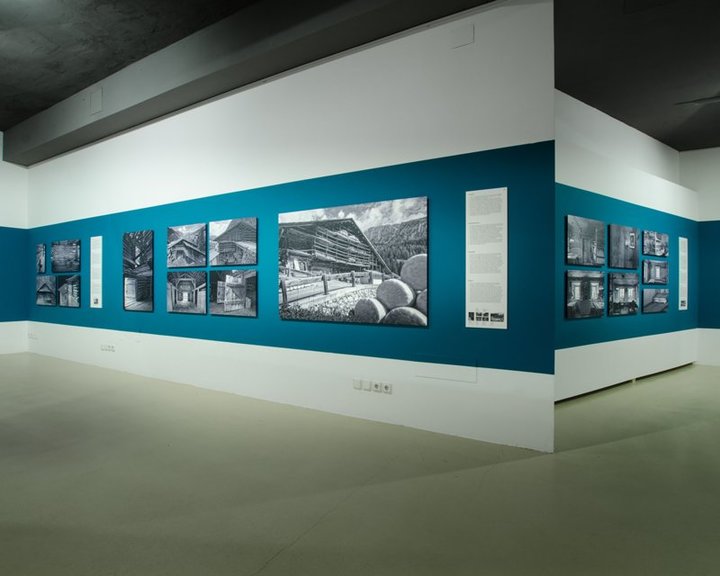 The Masi of Val Gardena – Mejes de Gherdëina – constitute an age-old architectural heritage, dating back in some cases to the 13th century, representing, apart from their historical and documentary value, an invaluable wealth of architectural, constructive and aesthetic features. However, these masi are increasingly threatened by demolition due to the radical economic and social transformation of the territory and the difficulty of adapting these historic structures to modern needs.
The loss of this heritage would mark an irrevocable depletion of part of the valley's material culture.

The constant threat of demolition and the greater interest shown recently in the preservation of the masi have made it necessary to re-document and re-photograph these characteristic buildings, so typical of peasant culture, expanding and updating the 2008-2013 Museo Gherdëina project, which covered all the masi and barns of the Val Gardena, censused in the Map of the Masi of Val Gardena.

The new black and white images, captured by the photographer Václav Šedý, give us an exciting, insightful glimpse into this distinctive architectural style, part of peasant culture for centuries.
The exhibition boasts a vast display of recent photographs and there is a catalogue with photos of all the masi depicted, evidence of the rich architectural heritage still to be found in Val Gardena.